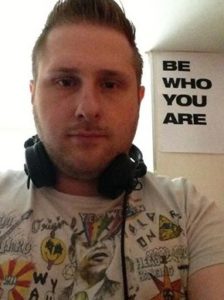 In 1994 He became interested in electronic music and at the same time, the wonders of disco, funk and soul. Hosting a radio station in 1997, he combines the force of the groove (Detroit Techno) and the power of the beat (Chicago House).

But it is towards the vocal house sound (New York Garage) that DJ Floy turns to. That sound is the mixture of all his influences. As a result, this radio show leads him to become the resident DJ of the largest club in his city during 2000-2002.

After providing clubbers with the sounds of soulful house and garage music, Floy returns to the origins of his career, the radio.

He names his radio show, Paradise Garage (in homage of Larry Levan and the mythical N.Y club).

Currently, in addition to hosting Paradise Garage, he utilizes his musical knowledge and technical skill producing and re-mixing with various artists.